Football is a rather aggressive sport, so in order to prevent any serious injuries, you should always wear the highest quality football gear. When it comes to adult football helmets, some of the world’s top manufacturers such as Xenith, Riddell and Schutt have come up with their own technologies and unique manufacturing processes, which is why their products are widely considered the best on the market right now.

Below you will find a list containing 14 exceptional football helmets, all of which are perfectly capable of keeping you safe even during the most intense matches. When it comes to looks and features, though, they each come with their own highlights, and so it’s ultimately up to you to decide which one suits your needs best.

From our network : 14 Of The World’s Tallest and Scariest Skywalks We’ll start off with a reliable Schutt football helmet, namely the Air XP Pro VTD II, which is officially the highest rated 5-Star helmet in the Virginia Tech STAR Rating System. Some of its most important features include Top Performing VTD TPU cushioning that absorbs high and low velocity impacts, as well as a Mechanically Attached TPU, which holds it securely in place will supporting better performing TPU cushions in the helmet.

We should also mention the TPU-Enhanced SUREFIT AiR Liner system, which is based on a TPU outer skin with extra surface coverage. This gives the helmet a very soft feel, which improves overall comfort considerably. Yet another impressive Schutt helmet comes in the form of the Vengeance VTD II, which uses a mix of dual layer and single layer TPU. This product also comes with an upgraded Surefit TPU AiR Liner and with a high-powered shell design that improves strength and impact absorption at the back of the helmet. Then there’s the Dynamic Faceguard Line, which is organically inspired and designed to be intimidating at a glance. These faceguards boast an offset eyebrow look that adds a plus of impact absorption. Moving on to the Riddell Speedflex helmet, we’re looking at yet another reliable product that was created after many years of extensive research. As a result, this helmet boasts quite a few innovative technologies that allow it to provide unmatched protection against concussions. The varsity helmet has a shell constructed using a polycarbonate material, while the youth version has an ABS plastic shell. The Patented Side Impact Protection system minimizes force from side impacts, while a Flex System was implemented in order to increase the shell’s flexibility. At the end of the day, this product also flaunts a Virginia Tech Helmet Rating of 5 stars, which is definitely impressive. In order to make the Vengeance Z10 appealing for more players, Schutt has decided to give it a smaller profile as well as a brand new Helmet Stabilization System. Highlights include an external cheek stabilizer, extra vent holes for improved breathability, a single layer TPU and a hard cup SC-4 chinstrap. As for the titanium facemasks, they extend further back when compared to previous offerings, and they were created using a material that’s 60% lighter too. 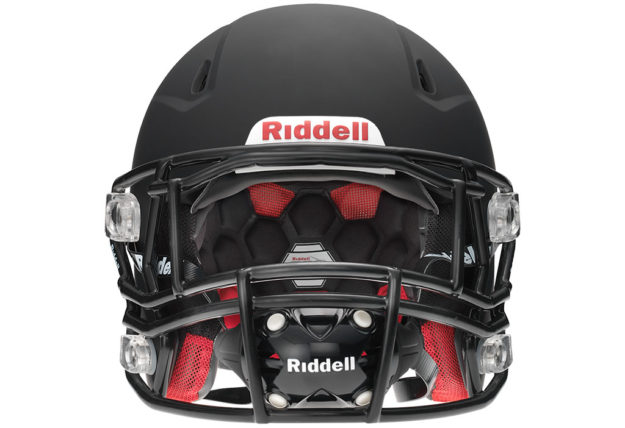 Available in a plethora of colorways, the reliable Riddell 360 helmet boasts the brand’s own Concussion Reduction Technology, as well as Advanced Frontal Protection thanks to its HITS Technology. Main details include improved occipital lock cradles inserted at the back of the head, a Hexagonal Liner System, and All-Points Quick Release, which minimizes face mask removal time while allowing easy access to the player’s face. The face mask and shell were put together using lightweight materials, which reduce the helmet’s curb weight for a more comfortable playing experience. The first Rawlings offering on our list is the Quantum Plus helmet, which is an amazing piece even though it’s more affordable when compared to its competitors. It comes with a large offset design, and it guarantees top-notch protection thanks to its custom-fit cushioning technology inserted in high-impact areas. The lightweight AIA Impact Absorption and Heat Exchange air flow tech systems are also present, which is definitely a plus in our book. Named after a hypothetical particle that always moves faster than light, the Rawlings Tachyon helmet was designed for players that want to gain an edge over their adversaries with the help of their equipment. That being said, this helmet flaunts a traditional offset complemented by a lightweight design, which includes a sleek polycarbonate shell as well as stainless steel hardware. The Tachyon is fully compatible with all Rawlings facemasks, and it is available in colors such as Scarlet, White, Black, Matte Black, Dark Green, Cardinal, Maroon and Orange. 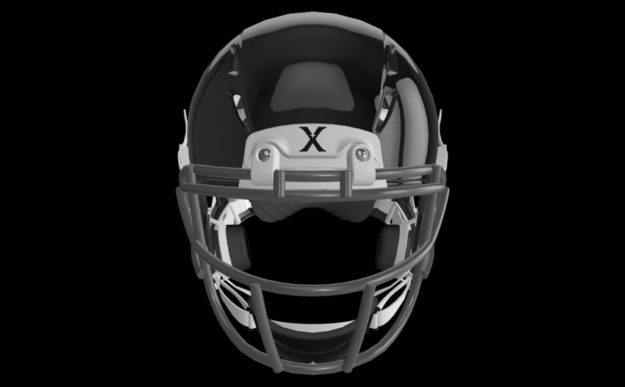 Fittingly named, the EPIC helmet by Xenith offers a perfect mix of aggressive looks and innovative technologies. It incorporates a special padding system as well as a liner with Aware Flow shock absorbers that feature a stepped system for multi-stage protection against low and high impacts. The liner is compatible with all head shapes thanks to an integrated chinstrap that can be tightened with ease. Furthermore, extra ventilation holes make sure that the wearer is able to remain cool during intense matches. Available in sizes ranging from S to XL, the Xenith X2 was designed for high school, college and pro level players. It comes with a FitBand silicon band that follows the shape and size of the head in order to ensure a custom fit, while tighten chinstraps guarantee an instant perfect fit without the need of pumps. The shock suspension system makes sure that the helmet moves independently from the shell, which helps reduce rotational forces. Last but not least, X2E shock absorber technology does a great job against linear impacts. The Vengeance Pro by Schutt is widely appreciated by pro players thanks to its comfortable fit and small offset shell, but there are other things that allow this product to stand out among its peers. These include a light single layer TPU cushioning for extra impact absorption and lightness, as well as a Black Surefit Air Liner with its outer skin made out of TPU, which guarantees a soft feel. This adult football helmet by Schutt comes with a Virginia Tech Helmet Rating of 4 stars, but don’t let this fool you! This is a high quality, reliable product that won’t break down even after thousands of impacts, all thanks to its durable construction. Highlights include an updated version of Schutt’s TPU, which is ribbed and built in one layer. Moreover, the TPU outer skin has increased surface coverage, while comfort foam was inserted for a plus of durability, and in order to support a dynamic fit. The Rawlings Impulse helmet is also worthy of some attention, especially since it features a high-performance polycarbonate shell with Heat Exchange vents and Rawlings’ own Custom Comfort Cushion system. The hardware was made out of stainless steel, which makes it particularly durable, while the Surlyn facemask clips will definitely last through many games as well. The helmet comes in several colorways, including Cardinal, Royal, Purple, Dark Green and Light Gold. Nearing the end of our list, we’re going to tell you a bit about the ION 4D by Schutt, which impresses with an aggressive design based on Schutt’s Energy Edge Faceguard attachment system. Offering amazingly unobstructed views, this helmet has an edge over similar offerings, but that also might have something to do with its two-piece SUREFIT inflatable air liner system, chinstrap integration and 12 dynamic Carbon and Titanium guard styles created specifically for this model. Last but not least, presenting the Xenith X1 football helmet, which incorporates the brand’s Adaptive Head Protection technology complemented by Xenith Aware-Flow Shock Absorbers. In order to minimize the risk of head injury, this helmet releases air strategically through a small opening, which reduces sudden movement in the head. This product adapts instantly to the wearer’s head shape and size without the need for air inflation. The chinstrap is also noteworthy, of course, as it is the industry’s first (patent-pending) six-point chinstrap with uniquely designed pivot points.